Article and photos by Gordon Dedman 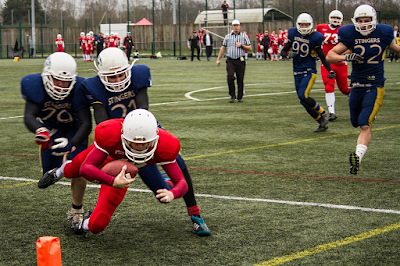 Unbeaten Surrey visited a strong Solent team Sunday on a mild January afternoon and both teams gave versatile performances in an attempt to gain the important win.


With Solent’s running game dominating the opening exchanges, Surrey began slowly. The Redhawks scored two touchdowns in the first quarter before the Stingers edged their way back into the game using at times their outstanding passing game.


The 20-20 halftime score reflected the balance of play in the first two periods and the determination of both teams to avoid defeat.


As the second half began, the Stingers proceeded to self-destruct giving up a series of sacks before having their punt blocked gifting superb field position to their opponents. Stern Surrey defending saw the team survive before they took their first lead with a superb pass completion.


Solent hit straight back using their powerful ground game to burst through Surrey’s defense, but the Stingers air attack propelled them back into a lead they didn’t relinquish to remain unbeaten. Their 48-34 victory ensured they remain top of their division.


This was a glorious advertisement for English football. Surrey’s magnificent passing game and the hard nose ground game from Solent were a pleasure to watch as both teams fought for the win.


With quarterback Jake Simpson’s passing prowess to Joseph Binney, combined with the ground game of Nicholas Argirous and Jacob Eltherington, the Stingers have the potential to progress to the playoffs.
Posted by Unknown at 13:50